A number of red flashing warnings signs have been getting brighter and flashing faster over the course of the past few weeks.

We knew that the food supply chain for the upcoming year would be stretched and somewhat limited in certain areas when the mid-west flooding decimated crop fields preventing many from planting on time, with others not being able to plant at all, so we warned to start gardening, indoors and out, to prepare to grow as much as possible yourself.

Those same floods killed ranchers’ livestock, so even meat would see a  significant decrease in availability along with prices increasing.

Then an early freeze forced many farmers to harvest their crops  before they were ready, causing even more of a shortage that wouldn’t be felt until the following year.

Readers were warned to plan smart, and learn how to can vegetables and fruits, even meats, and dehydration methods, even freeze drying garden harvests, in order to make the pain negligible for those with the foresight to have started back when the events were occurring.

Then came the COVID-19 coronavirus pandemic and the “panic” shopping that immediately began.

The Panic Shopping Began: ANP started receiving dozens upon dozens of photos from readers showing empty grocery shelves as panic shoppers, those completely unprepared for an extended length of time within their homes, buying up items faster than the stores could restock them, with some not having the products to restock with at all.

Amazon was forced to temporarily suspend their Prime Pantry service due to “high order volumes” tied to the coronavirus outbreak. Now, while you can order almost anything on Amazon, a look at delivery dates shows that the “In Stock” messages are a sneaky way to get orders but delivery in some cases are weeks or months away.

Amazon also started prioritizing the shipping and delivery of highly sought after products and  “essential items,” as Walmarts began setting up a one-way in/one-way out entrance and exit system, while limiting amount of people allowed into the store at one time. Walmart has determined that they can decide for shoppers what is “essential” and what isn’t.

As Mike Adams over at Natural News discovered,   those “essential” items do not include gardening supplies. That is right, the food supply in stores has taken a hit, yet Walmart is closing off whole sections, including gardening,  from the public.

In order to get things restocked, stores have now wiped out much of the food reserves in the warehouses meant to store what they need to restock.

We are not the only ones noticing this, or being told it is going to get worse, as a recent Steve Quayle alert, dated April 6, 2020, notes:

FIRST ISSUE:Number1 is the food supply itself which is divided into 2 distinct issues . The first issue is that until the stay at home order and closing of restaurants the food supply of the USA was divided about 50% into retail sales (and packaging the products for retail sales) (PS such packaging costs more but the consumers expect it) and the other 50% was for food service industry (hotels restaurants and fast food places). This means that 50 percent of the available food in cold storage and dry storage in the distributor warehouses is not available for sale at this time to the public.

There is also the situation that the western half of the United States (west of the mississippi river) the warehouses for retail food sales are EMPTY of food products which can be sold in the grocery stores!!! The Eastern states are just behind the western states in warehouses. To be blunt the reserves have been used up (the reserves were set aside for the summer holidays and special holiday times) so now there is no reserve any place in the food supply chain. So available food must be redistributed until the full production of the food processing companies can be restarted with people who are not infected with the virus.

The warning gets worse, read the entire thing over at Quayle’s website.

Note: For the moment Amazon is still selling gardening kits and supplies,  with a very reasonable delivery date range, but at this point we have no idea if or when they too are going to limit sales on items used to grow your own foods. 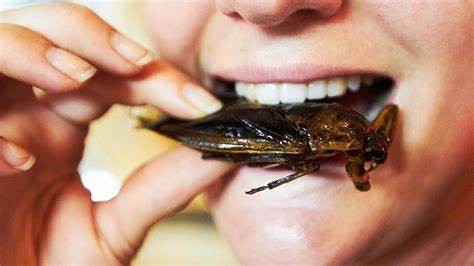 WHAT DO THEY KNOWTHAT WE DO NOT?

In the midst of this pandemic, we see the European Union (EU), out of nowhere, has decided to announce that they may  classify bugs as a “novel food” to allow “production of bug-based food items by autumn.”

The eating of insects has long been touted by climate change activists as a possible replacement for meat, which they claim negatively impacts the environment. However, eating bugs has remained a niche practice in the West.

Industry experts hope that the loosening of restrictions will open up market opportunities for the edible insect business, with companies in Spain, France and Switzerland ramping up production.

“We are expecting the next few years will be very interesting ones and obviously the novel food authorisations will definitely help,” Derrien said.

“The sort of foods ranges from whole insects as an aperitif or as snacks to processed insects in bars or pasta or burgers made out of insects,” he added.

“We believe that insects for food is one solution for some of the biggest challenges we are facing on the planet. In the context of scarce resources, and insect production is not too demanding, you have the capacity to produce high-quality protein. That is a very promising solution,” Derrien concluded.

While the plans may have been in the works for a while, the timing of the news reports is quite suspicious as the world’s food supply reserves have taken a massive hit due to the pandemic.

Makes you wonder what they know that we do not?

BOTTOM LINE – DON’T BELIEVE WHAT THEY SAY, WATCH WHAT THEY DO

Fact is no one totally trusts everyting any government entity publicly says, but watching the actions of world leaders, often tells a story of its own, even if they never admit it.

Seeing the global lockdowns tell us things are worse than what we know, even if what we know is pretty bad.

Seeing the closure of “non-essential” businesses, with leaders know full well  could and most likely will crash the economy, tells us the same thing.

Seeing corporations willingly preventing the sale of products they have in stock, and losing likely billions collectively, clearly indicates a situation worse than what we have been told publicly.

Seeing governments encourage the consuption of bugs or bug-based foods, indicates they are fully aware that “normal” foods are going to be in short supply and prices for what is available is going to skyrocket.

Grow fruits and vegetables. Get emergency survival foods, at least what you can still find. Learn to can. Learn to dehydrate your own foods.

Be ready when the food shortages hit, because then, even if it doesn’t hit immediately, you are prepared to ride out whatever they are hiding from us when it finally does.

Also, be prepared to protect what you have.

God bless and stay safe everyone.