The former CEO of social networking website ‘Reddit’ – Ellen Pao – made the startling Twitter admission that she “knew” Ghislaine Maxwell was “supplying underage girls for sex” and therefore refused to take photos with her at a party attended by Former Vice President Al Gore and other high profile individuals.

Maxwell was indicted on multiple charges last week in connection to an alleged sex-trafficking operation that brought girls as young as 14 to Jeffrey Epstein’s Manhattan home between 1994 and 1997.

Prosecutors allege Maxwell actively “assisted, facilitated and contributed to Jeffrey Epstein’s abuse of minor girls by, among other things, helping Epstein to recruit, groom and ultimately abuse victims known to Maxwell and Epstein to be under the age of 18.”

Pao – a lawyer who founded a “diversity consulting non profit” – said on Twitter that Maxwell was a guest at a super exclusive Kleiner Perkins Holiday party in 2011. 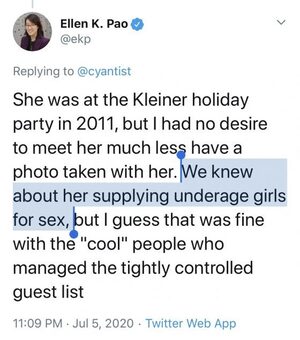 She shockingly added that she had no desire to take a photo with Maxwell as “we knew about her supplying underage girls for sex, but I guess that was fine with the ‘cool’ people who managed the tightly controlled guest list”.

Pao has since removed the tweet and made her profile private.

Apparently realizing the remark was way too hot, Pao tried to water it down, explaining in a subsequent tweet that it was “the press had described her as supplying underage girls for sex, but she had not been charged so I guess it would be more accurate to say we ‘suspected’ v ‘knew.'”

Confronted by a Twitter user who blamed Pao for being “fine with it too,” Reddit’s ex-CEO seemingly made another revelation. It actually looked even darker than the first one, especially since it came from a first-hand ‘party’-goer and not some “conspiracy theorist” keen on uncovering allegedly existing pedophile networks.

Of course I wasn’t. But I was a junior partner on the outside of the inner circle, and what I said made no difference here and in many other decisions.

Unfortunately, Pao did not elaborate further on who exactly was on the “inner circle” or what the “many other decisions” were about. Later in the day, she made her Twitter account private.

The National Pulse understands from a 2011 list of guests from the party that the following high profile individuals were also in attendance alongside Pao and Maxwell:

The party was described thusly by Business Insider in 2011:

With an ex-vice president in the house, even spouses weren’t allowed in. The spots were reserved for investors and their portfolio founders.

Everyone was dressed up except for an entrepreneur with a DropBox sweatshirt and another with flannel jammy bottoms on. Parked outside, of course, was a Fisker — the super sexy electric sports car from the latest startup trying to wean drivers from gasoline.

This isn’t the first that Pao had courted controversy in her time at Kleiner Perkins.

In May 2012, just six months after the holiday party that Maxwell attended, Pao filed a lawsuit against Kleiner Perkins for discrimination in the workplace and sought $16 million in damages. The claim went to trial and the jury ruled that Kleiner Perkins did not discriminate against her because of her gender or deny her a promotion because she was a woman.

Pao dropped her appeal and agreed to pay the legal fees incurred by Kleiner Perkins that amounted to almost $1 million.

In her time as CEO of Reddit, Pao drew heavy criticism as she led a campaign to curtail the ‘anything goes’ environment that attracted users to Reddit.

Reddit is a social sharing platform that is built around users creating forums where people can share news and content. Pao caused anger when she made the decision to shut down sections of Reddit which led to the accusation that she was limiting free speech.

This resulted in Pao firing Director of Talent, Victoria Taylor, a decision that led to a petition from users demanding Pao’s removal that attracted more than 210,000 signatures. In addition, many of the unpaid moderators who keep Reddit forums running, shut down their sections in protest.