Two recent events show us that a victory for Joe Biden and Kamala Harris on November 3 will unleash a war on whites. First was the alleged “white supremacist” plot, inspired by President Trump’s “rhetoric,” to kidnap the tyrannical Leftist governor of Michigan, Gretchen Whitmer. Second is Twitter’s suspension of Lauren Witzke, the anti-immigration, America First candidate who has already won the GOP Senate nomination in Delaware, merely for criticizing mass Third World immigration.

Michigan is a hotbed of nationalist, extremist and white supremacist hate groups, with more than two dozen active organizations, according to the Southern Poverty Law Center. During the early stages of the pandemic, it was also among the places where the president urged supporters to resist lockdown measures, with a tweet on April 17 urging people to ‘liberate’ the state”

This is a Gadarene Swine-style Rush To Judgement. Truth is, Brandon Caserta, leader of the group, is a NeverTrump, anti-cop anarchist.

“Trump is not your friend,” he says. “He’s shown over and over and over again that he’s a tyrant. Every single person that works for government is your enemy.”

Yet somehow that man is acting on Trump’s orders?! Ridiculous yes, but that’s what we’re told by people who want to suppress Trump and his supporters. 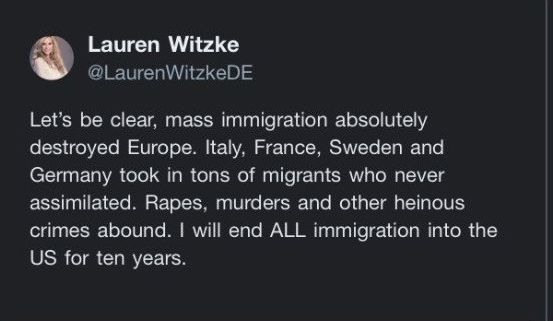 “Let’s be clear, mass migration absolutely destroyed Europe,” she tweeted. “Italy, France, Sweden and Germany took in tons of migrants who never assimilated. Rapes, murders, and other heinous crimes abound. I will end ALL immigration into the US for ten years.”

Further, the Ruling Class wants us to believe, amid the most fanatical and extreme Leftist violence since the 1960s, that “white supremacy” is the “most persistent and lethal threat” in the United States [Homeland Threat Assessment, DHS.gov, October 2020]. That ridiculous claim echoes FBI Director Chris Wray, who implied that whites were to blame for most domestic terrorism without saying it [Wray: Racially motivated violent extremism makes up most of FBI’s domestic terrorism cases, by Olivia Beavers, The Hill, Sept. 17, 2020].

Thus is the federal government serving as armed enforcement force for Anti-Defamation League and $PLC, while the radical Left and its GOP enablers are hard at work trying to enact the terrifying Domestic Terrorism Penalties Act, which would legally attack rightist dissidents as never before.

The political prosecutions have already begun:

“Crimes” are often manufactured from whole cloth, like the hundreds of hate crime hoaxes that ostensibly attest to the latent “right-wing fascism” that pervades American life.

And Leftist prosecutors now free the guilty and prosecute the innocent. Anarcho-tyranny is the law of the land.

These false flags will accelerate. Leftist political assassination and terrorism will continue unabated, excused or roundly ignored by the hate-Trump, hate whitey MSM, and more and more white bogeymen will be sacrificed to the narrative.

Tucker Carlson was right in predicting that school curricula will teach that “white supremacists” were responsible for 9/11.

The Daily Stormer’s Andrew Anglin was the first dissident to be deplatformed. (Let the record show that VDARE.com defended his right to publish). Alex Jones was next. Big Tech correctly thought they would be easy prey, that the rest of the bovine herd would move on without protest.

Facebook and Twitter now censor POTUS. Do you think they won’t censor you? Remember: their violence is speech, while our speech is violence. The coalition of the damned can gleefully wish for Trump to die of the Chinese Virus, but immigration patriotism like Witzke’s is labeled “hateful conduct.”

Cocktail conservatives bemoan the Chinese government and its social credit scheme, without noticing that we already live inside the panopticon—a digital gulag that will soon leave cyberspace and enter our physical world.

Today, it is less damaging to one’s social standing to be labeled a pedophile than a white nationalist. Enter the cashless society, and we might not be able to travel, have bank accounts, get financial or legal services, travel, or participate in the economy at all.

How far a step is it from Twitter’s censoring a “white nationalist” to Verizon’s refusing that same person a landline? Will “white nationalists” even be able to call 911? In England, doctors can deny medical treatment to “racists”[ UK: National Health Service to Deny Treatment for ‘Racist or Sexist Language, Gestures, Behavior,’ by Jack Montgomery, Breitbart, Nov. 4, 2019]. And Yelp will now tar and feather “racist” businesses, meaning those that are insufficiently ethnomasochist.

Connect the dots. Put the pieces together. The image is clear.

The bipartisan, anti-white, anti-American Establishment is laying the groundwork for a regime of ruthless, totalitarian suppression of white dissidents—the real dissidents, not the egalitarian Red Guards serving as handmaidens to Wall Street while flying the standard of the “Counterculture.” We, the people of Middle America, are the counterculture.

Make no mistake. Republicans, Democrats and the Main Stream Media have all declared “war” on “white supremacy”–which really just means whites as a people.

In other words … you.

How long until Dissident Right websites disappear, or until VDARE.com goes dark? How long before we are arrested? Or worse?

Petty tyrants now brutalizing ordinary Americans over their refusal to wear The Mask as the sign of obedience. Cops tased a woman at a football game for not wearing a mask.

These people will be thrilled to lock us up in the Gulag and throw away the key.

I would not be surprised to learn that I’m on a watchlist. If you’re reading this, you probably are too.

The conspiracy to destroy the Historic American Nation goes far beyond the effort to depose Trump, which his own appointees are deliberately obfuscating [Donald Trump: ‘Very Disappointed’ that ‘Obamagate’ Investigation Won’t Be Released Before Election, by Charlie Spiering, Breitbart, Oct. 9, 2020]. It is a coup to dispossess and replace the Historic American Nation.

Trump must purge the departments of Justice and Homeland Security, replace the traitors with patriots, use his very real power to take action against the real threat to our nation.

As Gregory Hood has written, we have lived in an occupied country for some time–but it’s an occupation we cannot contemplate and need not permit [On Faith and Purpose, American Renaissance, Nov. 22, 2019].

But why does the Ruling Class resort to repression? Because in a free society that enjoys uninhibited freedom of association and expression, we win.

And in that world, we will not be replaced. White America does not have to die. The duty is ours, and ours alone, to carry her fire and save it from being utterly extinguished forevermore.